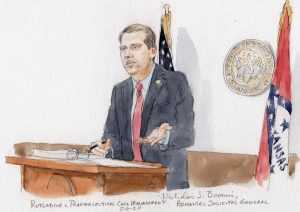 The propriety of the Arkansas law – and other similar state statutes – warrants the court’s attention because ERISA preempts state laws that “relate to any employee benefit plan” covered by ERISA. The wide-ranging argument on Tuesday reflected the difficulty the court has had in offering clear and steady guidance about ERISA’s preemption provision. The argument presented several possible approaches to the problem. Because the format of the court’s telephonic oral arguments sharply limits the interaction among the justices, it is not easy to identify any particular approach that is likely to appear in the final decision.

The argument started with a presentation by Nicholas Bronni, the solicitor general of Arkansas, arguing that the state’s statute regulates only the relation between the PBM and the pharmacy, something entirely divorced from the “plan” relationship on which ERISA focuses. Thus, Bronni argued that the statute is really little more than price regulation of the type the court previously accepted in a case validating New York’s ability to regulate hospital prices.

Several of the justices were starkly skeptical of Bronni’s presentation. For Chief Justice John Roberts, a problem with Bronni’s argument is that despite the statute’s indirect effect on drug prices, “it seems to me that [the procedural portions of the statute] really do go to what ERISA is trying to regulate.”

Justice Samuel Alito raised a different issue with Bronni, worrying about how far the court’s ERISA jurisprudence had wandered from the broad language of the law’s preemption provision. Suggesting that “what we generally do is to ask … what the language would have been understood to mean” when it was adopted, Alito commented that “if we were to take that approach here, wouldn’t that lead to the conclusion that this law is preempted?” When Bronni responded that ERISA’s preemption provision is so broad that it couldn’t possibly be read literally, Alito retorted: “If we follow … the way we generally interpret statutes in this case, you would be in a lot of trouble, wouldn’t you?”

Another group of justices worried about the effect of the state statutes on drug prices. Justice Sonia Sotomayor, for example, offered a hypothetical in which a state set price floors so high that, as a practical matter, the plans couldn’t sell the covered drugs, and she then pressed Bronni to explain “why wouldn’t that scenario be preempted.” Later in the argument, Justice Brett Kavanaugh seemed to adopt a similar perspective, as he suggested that “something’s gone awry here in the jurisprudence” when parties can argue that costs are “not a central matter of plan administration” subject to ERISA preemption. For Kavanaugh, “when you zoom out … costs will directly affect the benefits paid to beneficiaries, and the goal of ERISA, after all, was to protect American workers, including, it would seem, against state regulation that would perhaps favor state businesses over state workers.”

Offering yet another perspective, Justice Neil Gorsuch pointed to an earlier case (Gobeille v. Liberty Mutual) in which the court held that ERISA preempted a Connecticut statute that established reporting requirements for health plans. Gorsuch seemed to find that case highly relevant, as he pressed Bronni on the topic: “If reporting relates to health plans, why wouldn’t the payment for drugs? That would seem to be one of the central functions of a health care plan.”

When Bronni’s time concluded, the justices heard from Frederick Liu on behalf of the U.S. solicitor general, supporting Arkansas’ argument in favor of the statute. Much of the discussion in that part of the argument was duplicative, but Justice Elena Kagan offered a sharp perspective emphasizing the importance of uniformity. As she put it:

One of the main drivers of ERISA’s preemption provision was a concern about uniformity. And here we have 45 different states that have passed all kinds of laws with respect to these PBMs. And I’m wondering why that doesn’t raise exactly the specter that the drafters of ERISA were concerned about, where the PBMs are trying to do 45 different things in 45 different states.

The argument seemed to settle down when Seth Waxman appeared, challenging the Arkansas statute on behalf of an association of PBMs. That is not to say that the justices all seemed to support Waxman – just that the acerbity of their tone seemed to decline somewhat as the hour elapsed. For example, Justice Clarence Thomas pointed out to Waxman that he was impressed by Liu’s answer to Kagan, in which Liu had argued that ERISA barred only disuniformity related to plan administration, not disuniformity in areas traditionally subject to state regulation. Thomas then offered Waxman an opportunity to rebut Liu’s point. Similarly, Justice Stephen Breyer suggested that the court had “struggled” through the years with ERISA’s preemption provision and worried that accepting Waxman’s argument here would “just mak[e] life much more complex.”

Gorsuch (who had seemed so certain that Gobeille called for preemption of the statute in his discussion with Bronni) asked Waxman to discuss whether, “if ERISA preempts the law here, should we worry that it also preempts other sorts of general regulations about other kinds of benefits.” “Some plans,” Gorsuch noted, “provide daycare benefits, death benefits, all sorts of other kinds of benefits. Where would you have us draw the line if preemption occurs here?”

In the end, the argument doesn’t tell us much about how the justices will decide this case, in part because of the lack of a shared conceptual framework about how to analyze the text of ERISA. The justices did seem particularly dubious, though, of the Arkansas statute’s procedural rules about the timing of appeals, updating of lists and the like. We might see a relatively splintered court, looking once again for a clear and reliable method of assessing the reach of ERISA’s preemption.