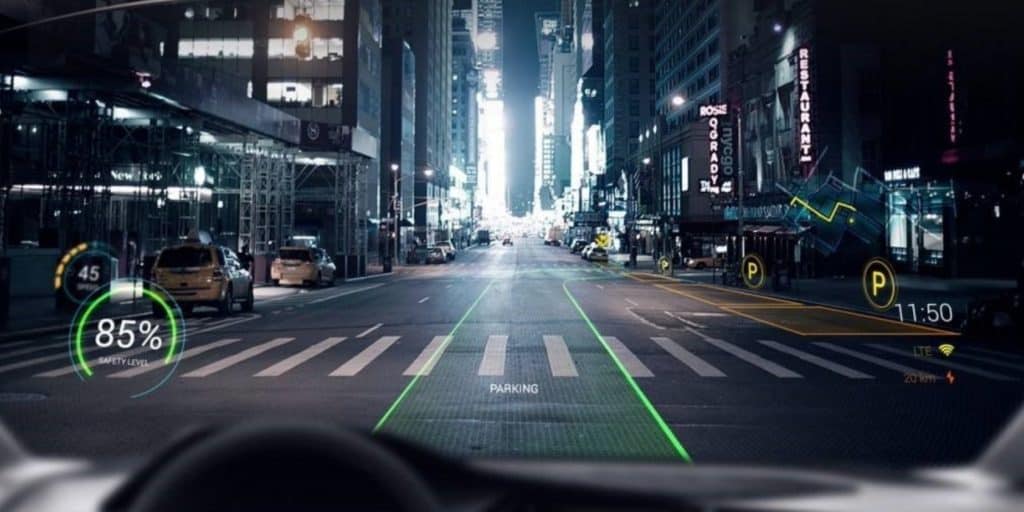 A few years ago, using display in automobile was considered a luxury reserved only for high-end vehicles. But today, the rapid development in the automotive industry has made AR displays a mandatory in most automotive designs.

Recently, the use of Augmented Reality (AR) technology to enhance the gaming graphics has taken centre stage. However, heads-up displays (HUDs) are the latest innovation in the driver assistance systems. Beyond the large monitors used for in-console navigation, control and rear-seat DVD systems, the most exciting advancements in HUD is extending to any transparent display that presents data without requiring the user to look away from the usual field of view.

HUD system lets the driver to focus on the road while at the same time having a hold over vehicle information such as speed, warning signals and indicator arrows on the windshield. It fills the gap that the driver requires to put on the road at an instrument panel on the dashboard. Engineers believe that incorporating augmented reality and head-up displays (HUD) will make roads safer. Ultimately, as an added benefit, the technology will also help drivers trust in advanced driver assistance systems (ADAS) and autonomous vehicle (AV) technology.

What is AR head-up display (HUD)?

Augmented reality (AR) HUD display is a projector that visualizes ADAS and driving information from driver’s view. It is the latest advanced driver assistance system projecting real-time data to enable drivers to stay focused on roads for their convenience and passenger’s safety. The data seen in the windshield consists of warning signals, speed, navigation displayed directly on the screen. AR HUD enables vehicles to communicate more information than a traditional dashboard. For example, the system can indicate ways the car interprets the environment, senses dangers, plan routes, communicates with other technologies and triggers ADAS.

Some of the automakers who use HUD technology are,

• Volvo, the automobile company is well known for its deployment of HUD technology that ensures passenger safety.

• BMW 7 series uses HUD to display content at a foggy atmosphere or low visibility areas. The company’s current generation HUD comprises of lane-specific navigation along with an option of controlling the audio system through the HUD.

• Lexus LS 500, one of the luxury automaker’s flagship sedans featured HUD technology in its display system. The car had the largest HUD with a 24-inch widescreen improving the human-machine interface.

Standard models: This is currently available in the market. It projects dashboard information in front of a windshield or the driver’s field of view.

Advanced AR HUD: It will project complex graphics that correspond to objects in the real world. For example, the car’s thermal sensors could detect an animal or human and highlight their presence to the driver on a foggy night.

The footprints of HUD technology was seen in World War II. During World War II, HUD systems were deployed for pilots who worked on war aircraft. The system helped pilots hit the target while manoeuvring. They required the information to be displayed in the ‘head-up’ screen from where they can focus clearly. Military aircrafts followed suit and deployed HUD systems in modern aircraft. Usage of HUD technology could be seen in military aircraft in the 1960s and commercial aircraft in the 1970s.

Older automotive-based HUD systems used a small cathode ray tube to project vehicle data onto a special element on the windshield. Information is superimposed on the lower half of the glass, which is inside the driver’s immediate line of sight. To allow for faster comprehension of information, data is displayed at a focal point equal to that of the roadway in front of the vehicle. Because of this, the driver doesn’t have to refocus his/her eyes to view HUD information.

Instead of showing secondary static information, AR HUDs can display graphics that interact with driver’s FOV, overlaying critical information directly onto the real world. This requires the integration of a vast amount of real-time vehicle sensor data, which is not easy to acquire.

AR image display quality is in multi scenes and is sunlight readable. The best AR HUD clearly identifies image information that the drivers use to distinguish the path and virtual graphics while driving on the road.

For the presentation of virtual imaging distance (VID) and image size, the overall optical design adjustment angle is required and must be well designed, including the addition of sensing elements. All holographic images are projected by laser beams composing with RGB colour, hence the laser beam colour adjustment becomes one of the most significant techniques during design. There is no need to adjust the focal length, which reduces the customer cost on designing windscreens.

ADAS alerts are primarily indicated via a blinking symbol or an audible alarm. But an AR HUD can identify threats by directly marking them within the driver’s FOV. Presenting ADAS alerts could significantly increase driver situational awareness, especially when driving at night or in low visibility conditions.


Do the sharing thingy

Everything You Should Know About Car Loans (Lån)