All in, I have 15-20 banks and financial names reporting this week, which should give bank investors a good look at credit losses, net interest margin compression, and (possibly) the first look at the guidance for 2021, although without stock buybacks, there may be no willingness to give guidance to investors.

For the Schwabs, BlackRocks (NYSE:BLK) and names like Goldman and Morgan Stanley (NYSE:MS), we get to see how further credit market improvements over the third quarter aided bond issuance, and how the robust capital market activity aided the capital-market-sensitive returns for the big banks.

Ed Yardeni (cut and pasted from his blog) starts us off with his view of what’s expected for credit:

“Financials: Reality Check Coming. Financials has been one of the S&P 500’s worst-performing sectors this year, battered by a flat yield curve, surging loan losses, and a regulator that’s prohibiting the payment of dividends and stock buybacks. Next week, as banks’ Q3 earnings start rolling in, we’ll get a better feel for how well banks are reserved for loan losses. Many set aside billions of dollars for losses in Q2 as Covid-19 descended. Given the poor performance of bank stocks, investors may already have priced in banks’ need to continue building reserves in Q3.

Let’s take a look at bank reserves and loan losses over the past few months:

(1) Bad news: Losses in many loan categories rising. While home-related loans continued their strong performance through Q2, delinquencies in other loan categories were increasing, in some cases sharply. The percentage of balances that are 90 days or more delinquent remains at an extremely low 0.8% for home mortgages and only 1.3% for home equity loans (Fig. 2).

Conversely, there has been a sharp spike in credit-card loan delinquencies to 9.8% in Q2 compared to 8.4% in Q4. The figure looks like it’s ready to climb further. The peak of delinquencies during the Great Financial Crisis (GFC) was 13.7% during the first half of 2010.

Auto loan delinquencies have been slowly grinding higher over the past five years and now stand at 5.0% of total balances. That’s just below the record high of 5.3% during Q4-2010. Student loan delinquencies have dropped sharply to 7.0% from north of 10% last year; borrowers have been allowed to pause those payments without interest accruing since March and can continue to do so through year-end.

(2) Good news: Reserves are up. Banks have been setting aside funds to deal with the loan losses that are sure to mount. The allowance for loan and lease losses at all commercial banks has surged higher, to $219.7 billion during the September 23 week, a level last seen during the GFC (Fig. 5). Large banks have been more aggressive, with their allowance rising to $142.3 billion, up from $68.8 billion at the start of the year. Small banks have increased their allowance only to $75.3 billion, up from $42.9 billion on January 1.

(3) Hope in the squiggles. Earnings for banks and brokerages are going to be ugly this year; but after falling like a knife into negative territory, 2020 earnings forecasts have stopped sinking. Estimates for next year are expected to bounce for the S&P 500 Diversified Banks and Investment Banking & Brokerage industries but continue to fall for the S&P 500 Regional Banks industry. Here’s a closer look.

The S&P 500 Diversified Banks stock price index has fallen 37.0% ytd through Tuesday’s close, making it the worst-performing industry in the Financials sector (Fig. 6). Yet the industry’s forward earnings bottomed in late April and have resumed an upward trajectory (Fig. 7). The industry’s 2020 earnings are now expected to fall 56.6% in 2020, an estimate that has remained relatively steady over the past five months, and earnings are expected to jump 64.0% in 2021, an estimate that has come down from its peak of 85.3% in late April (Fig. 8).”

Ed’s commentary is always first rate. I’ll show readers the trend in EPS and revenue estimates for JPM, BAC, SCHW, etc. before the end of the post.

Tom Brown thinks “banks are investable” here (subscription may be required), but Tom also wrote an article on October 1 ’20 saying that “bank loan-loss provisions are too high”. Hopefully readers can see what’s attached. If not, my apologies, but from the headlines, Tom still likes banks, as you can tell.

This blog gave the macro view on “expected” EPS and revenue growth for the financial sector this week. Here is a look at some of the revision trends for readers for clients’ major holdings that will report this week:

JPMorgan reports its calendar third-quarter 2020 before the opening bell Tuesday morning, October 13th, and Street consensus is expecting $2.23 in earnings per share on $28.3 billion in revenue for expected y/y growth of -17% and -4% respectively.

EPS estimates have been revised higher, while forward revenue estimates for JPM the last few months have been flat to lower. 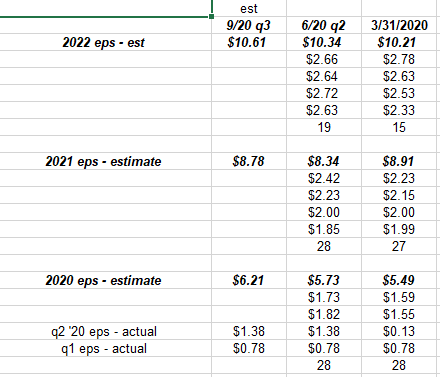 JPMorgan has always been part investment bank and capital market participant and part commercial and consumer lender, so the thinking is that the parts of the business showing strength, like the 79% increase in Q2 ’20 trading revenue driven by FICC’s 99% and equity revenue’s +38%, will offset some of the credit loss pain. JPMorgan took a $8.9 billion loan-loss provision in Q2 ’20 on top of the $6.8 billion in Q1 ’20, but there was a 2020 total of $40 billion expected for JPMorgan, so the run rate through Q2 ’20 is a little below the annual expected rate as of April 2020.

Readers might not agree with it, but with a year like 2020, I like to look at “averages” over a multi-year period and JPM is trading at a 12x PE multiple (three-year avg.) while EPS over the next three years is expected to average 7% on just 1% revenue growth (again the three-year avg.).

If 2021 gets a lift in terms of estimates after the election from a new stimulus plan (regardless of who wins), I think it will be a big plus for the bank sector and the prospect of lower credit losses ahead.

Down from $140 to $100 just prior to reporting Q3 ’20 earnings, the stock’s fair value is probably closer to $120. I do think that there is at least 20% upside in the valuation, but how fast that valuation gap closes remains to be seen. Plus investors get a 3.5% current dividend yield to boot.

BAC is set to report Wednesday morning before the open, with Street consensus expecting $0.49 in earnings per share on $20.89 billion in revenue for expected y/y declines of -35% and -9% respectively.

A large Buffett holding now with a dividend yield of 2.8%, BAC shakes out the same as JPM with 12% EPS growth expected the next three years (average) on 1% revenue growth and trading at a 12x multiple currently given current estimates.

It is not a big holding for clients – JPMorgan is far larger – but the consumer book might have upside if the credit losses aren’t as bad as expected.

Back in mid-April, BAC was assuming $30 billlon in loan-loss provisions (LLPs) for full-year 2020; however, like JPMorgan, the first two quarters of losses were under $10 billion, so BAC has a bigger cushion in terms of expected loss.

The 2020 high for BAC was $34, but I think the stock is worth at least $30 near term, possibly for a trade into year-end 2020, but so much depends on when the Fed will allow buybacks and allow banks to return more capital.

Charles Schwab closed on the TD Ameritrade (NASDAQ:AMTD) merger this week, which will chuck roughly 1/3rd of the custodial RIA market share, $5 trillion in assets, 24 million clients, and roughly 11% market share of the retail investor/trader market.

Schwab is sitting with a lot of capital right now. Unfortunately, it cannot do anything with it, and I want to see what the balance sheet looks like after the merger.

Looking at the numbers, 2021 has now turned negative in terms of EPS and revenue growth, which makes me a little nervous.

Initial numbers on the merger thought that Schwab would need to spend $1.6 billion on “integration spend,” so we’ll see if that number has changed.

Assuming that this was a “normal” market, I’d say Schwab was worth $50-55 per share, but Schwab’s net interest margin (NIM) has been crushed and its pre-tax operating margin has fallen from 46% to 40% the last four quarters.

The stock is probably worth at least mid-$40s with the current capital markets, but to move higher from there, I think we’ll need higher short-term rates and substantial savings from the Ameritrade merger.

Schwab is trading at 18x-19x three-year average of expected EPS, with -11% EPS decline expected on a -1% expected revenue growth.

There is a lot of bad news in the stock right now. Hoping it doesn’t get worse.

Summary/Conclusion: Six months after the onset of the pandemic, and the almost complete shutdown of the US economy, there remain a lot of questions about potential credit losses at the banks, but there will also be some definitive answers after the election as another round of fiscal stimulus is expected.

Personally, I don’t think the Financial sector will become like Energy, i.e. a secular decline.

We’ll know a lot more after this week in terms of the state of consumer credit within the banking system. If consumer credit is better than expected, the Fed can allow the banks to repurchase stock again, but to the degree allowed will be the question, if and when it happens. The net interest margin compression will likely last a while unless the yield curve steepens, and that’s more likely than the Fed raising rates.

Thanks for reading, and take all of the above, particularly the valuation work, with a healthy grain of salt. I do think banks and financials in general are cheap, but know what you own and watch the credit metrics.