The deepest economic crises are also crucibles for new economic thinking. The Depression led to Keynesian macroeconomics. The second world war cemented support for the welfare state and the mixed economy. The inflationary 1970s and the oil shocks propelled free-market ideas to power.

We should expect the coronavirus pandemic, which amounts to the greatest peacetime economic disruption in living memory, also to lead to big shifts in the consensus on what is good economic policy. To see the direction of change, look to that guardian of economic orthodoxy, the IMF.

Every year, in the lead-up to its annual meetings — the 2020 forum is about to start — it publishes the “analytical chapters” of its flagship publications. The growth forecasts issued at the meetings are what will hit the headlines. But the underlying analyses often provide deeper insight into changing economic conditions and the shifting realities of economic policymaking.

IMF economists are hardly at the forefront of radicalism, but they have often shown the way once the world’s economic policymaking elites are ready to move. In the past decade, IMF research has lent authority to several reversals of the pre-existing consensus (and its own previous views), such as giving qualified approval to capital controls and upgrading the effectiveness of fiscal stimulus. It has played down the harm it expects from high public debt. In each case the IMF imprimatur has made it easier for national governments to shift policy in the indicated direction. 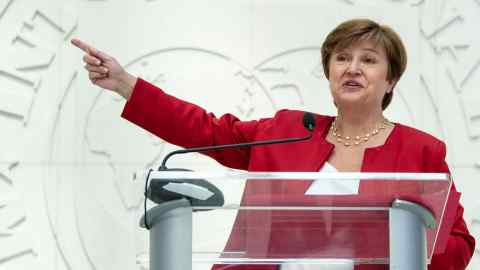 So what is the fund’s thinking today? Its three latest analytical chapters are all noteworthy. The fund’s Fiscal Monitor analyses public investment, which has been on a downward trend since the start of the millennium. Its researchers find that, provided it is well-directed, public investment is particularly powerful in uncertain times. The most striking effect is on boosting private businesses’ willingness to invest: raising public investment by 1 per cent of gross domestic product raises private investment by more than 10 per cent.

In addition, the researchers establish that the public health benefit of lockdowns is much greater when they are introduced early (while infection rates are low) and when they are tightened fast rather than gradually. As a result, the “narrative” of a trade-off between public health and the economy “should be reconsidered”, according to the IMF. Locking down early and quickly can also be best for the economy.

A similar argument is advanced in the third chapter, which finds that “the goal of bringing net carbon emissions to zero by 2050 in each country can be achieved through a comprehensive policy package that is growth friendly (especially in the short term)”. In other words, there is neither a trade-off between health and wealth, nor one between decarbonisation and growth.

The IMF’s favoured policy mixture includes renewables subsidies, green public investment, steeply rising carbon prices and direct transfer of carbon tax revenues to households to make the poorest at least as well-off as without higher carbon prices. This “carbon tax and dividend” approach already receives support from green parties in many countries, French and German government economic experts and US Republican party grandees. The IMF’s imprimatur surely means this is an idea whose time has come.

There is a common theme in these analyses. They refute what used to be commonplace: that government intervention in the economy, albeit for good causes, must come at a cost in lost efficiency and growth. That does not mean the state needs to be bigger. But it does mean that the public and private sectors have less opposed interests than was assumed for decades in economic policymaking.

After 1945, the guiding assumption was, first, that the state knew best, then that the private sector was best. We are about to transcend both, in favour of an economic worldview based on finding ways in which government intervention can guide the private sector to perform better. In that sense, economic planning and the activist state are back.