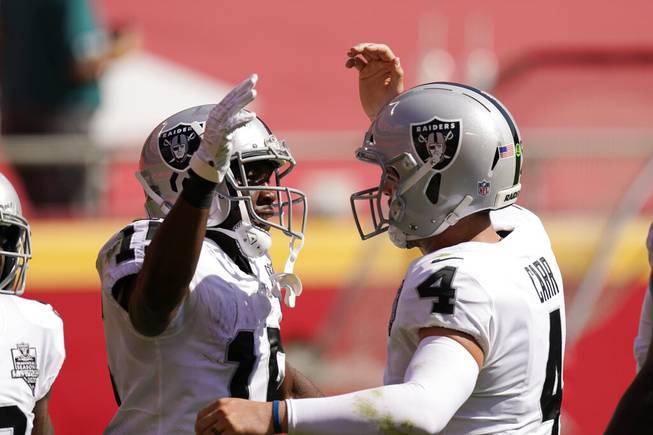 After the first-half fireworks, the Raiders countered and went back to their more familiar, methodical approach. A 13-play, 66 yard drive ended with a 7-yard touchdown run by Josh Jacobs to give Las vegas a 30-24 lead early in the fourth quarter. That drive took 8:00 off the clock, and the Raiders next possession — a 10-play, 55-yard drive that ended in a field goal — chewed up another 5:16.

Fans want the Raiders to sling the ball and produce more explosive plays, and they did that in Kansas City. And when the game was on the line, Gruden and Carr were able to switch gears pretty seamlessly and play the possession game. It was a varied and near-flawless offensive performance, which is what it takes to beat Kansas City. Credit to Las Vegas for pulling it off.

The Raiders defense was not good, for the most part, but they made key plays when they had to be made.

After Las Vegas took a 30-24 lead early in the fourth quarter, the Chiefs faced a key 3rd-and-7 at midfield. Patrick Mahomes stepped up in the pocket to extend the play, which he had done successfully all day, but Maxx Crosby peeled off his block to record the sack and kill the drive.

The Raiders tacked on a field goal on the ensuing possession to make it 33-24, and Kansas City was forced to go for it on a 4th-and-7 from its own 28 with five minutes remaining. Much-maligned defensive end Clelin Ferrell applied pressure as part of a three-man rush, and Mahomes’ desperation pass was intercepted by safety Jeff Heath. Heath returned it to the 2-yard line, and Josh Jacobs plunged into the end zone on the next play to make it 40-24.

Those two clutch plays papered over another bad showing by the defense, which allowed 6.3 yards per play for the game. But hey, you’re never going to completely shut down the Chiefs; forcing five punts, getting an interception and a turnover on downs is a pretty good result, even if it didn’t look pretty.

Gruden takes a chance (or two)

Gruden is a conservative coach by nature, and he’s probably never going to be as aggressive on fourth downs as the analytics crowd wants him to be. But he went for the jugular on Sunday, and both times he was rewarded with game-changing plays.

On the final play of the third quarter, with the score tie 24-24, Las Vegas was staring at a 4th-and-1 inside the red zone. Gruden opted to go for it, and Carr picked up two yards on a QB sneak. Two plays later, Jacobs scored the go-ahead touchdown.

After Kansas City cut the lead to 40-32 late in the fourth quarter, the Raiders were again faced with a big decision on another 4th-and-inches, this time at midfield. After using the 2-minute warning to think it over, Gruden again called for a QB sneak, and Carr’s dive was successful again. The Raiders kneeled on the ball from there, running out the clock on the biggest win of the Gruden’s second tenure.