Intercept Pharmaceuticals, Inc. (NASDAQ:ICPT) is in the news once again. This time, an article alleges OCA, the company’s only commercialized drug, has become the subject of an FDA investigation related to its safety. The stock, once battered by the company’s failed attempt to make OCA the first FDA-approved therapy for NASH, has slumped to trade near a 52-week low last week. The article has made no revelation, and the newly-identified safety signal, under evaluation as part of the FDA’s routine post-marketing surveillance, is classified as only a “potential risk” whose link to the drug is yet to be established.

As Intercept refocuses on OCA in PBC, the reputational damage can further decelerate the sale growth, already under pressure from the pandemic-related slowdown in new patient starts. Though the company leads in NASH therapeutic development, the highly complex path for a regulatory signoff rules out any premium for the current forward price-to-sales multiple, which, even with my optimistic revenue forecasts for 2020, identifies a modest premium for the stock. With the margin of safety being hardly adequate to offset the sales as well as R&D uncertainty, my neutral view on the stock remains. 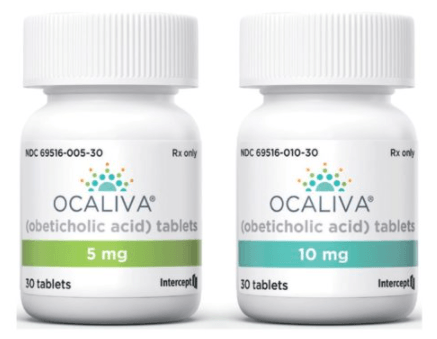 Not even a week had passed since its previous regulatory hurdle when I last penned my article on Intercept in early July. The stock had crashed ~39.7%, posting the sharpest one-day drop following the announcement of the CRL (Complete Response Letter), which relates to the NDA (New Drug Application) the company filed for OCA (obeticholic acid/Ocaliva) for liver fibrosis due to NASH (nonalcoholic steatohepatitis). Despite the neutral rating on the stock, based largely on the uncertainty linked to the clinical development of liver therapies, I remained optimistic about the company’s prospects. After all, the FDA’s decision was based on surrogate histopathologic endpoints on 18-month data of the REGENERATE trial, a Phase III study of OCA for the indication. The regulator had recommended the company to continue the long-term outcomes phase of the trial and requested even more post-interim efficacy and safety data from the ongoing trial.

Last Thursday, the hard-hit stock faced another blow when STAT news reported that OCA had been the subject of an FDA investigation linked to a safety issue since last May. The safety concerns of the drug go back to 2017, and this time, the report specifies a risk related to liver injury. Despite the explosive nature of the news item, it made no revelation. Buried in its latest 10-Q filing, Intercept itself reveals the onset of the FDA inquiry of the NISS (newly-identified safety signal) for Ocaliva – currently approved for PBC (primary biliary cholangitis). The safety signal, classified as a “potential risk”, has led to the evaluation as part of the FDA’s routine safety surveillance of post-marketing data of Ocaliva, the company reveals.

The FDA has notified us that in the course of its routine safety surveillance, in May 2020 the FDA began to evaluate a newly identified safety signal regarding liver disorder for Ocaliva which the FDA classified as a potential risk. Pursuant to FDA guidance, this does not mean that the FDA has concluded that the drug has the listed risk or that the FDA has identified a causal relationship between Ocaliva and the potential risk.

What is an NISS and its Consequences?

According to the guidelines of CDER (Center for Drug Evaluation and Research), the FDA unit that regulates OTC and prescription drugs, a NISS is initially categorized into a potential risk, an important potential risk, or an emergency. Unlike the latter two categories, where the negative impact on public health is evident, the potential risk implies a yet-to-be-established suspicion of a link between the drug and the safety issue. Unless the agency fails to establish a clear basis for the safety signal in an evaluation that can take up to 12 months, the drug will be subject to regulatory action ranging from a labeling change to the removal of the drug for the particular indication.

Potential risk: An untoward occurrence for which there is some basis for suspicion of an association with the medicinal product of interest, but where this association has not been confirmed.

Company Prospects Depend on OCA

In response to my inquiries, the company was quick to point out the issue at hand can only impact OCA for PBC and is not related to the NASH filing for liver fibrosis. But with no formal announcement by the company, the panicked investors lost no time in dragging the shares ~8.1% after the news report, and following another ~2.6% decline on Friday, the stock now stands barely above its 52-week low. Their consternation is justifiable as Intercept, with a narrow portfolio, has OCA as the only commercialized product, and all its clinical studies relate to the drug. In addition to the REGENERATE trial, Intercept is currently advancing two late-stage studies for OCA: a Phase IV confirmatory outcomes trial for PBC, and a Phase III trial for NASH with compensated cirrhosis. A Phase II study evaluating OCA in combination with bezafibrate for PBC is currently waiting for enrollment.

With no approved therapy, NASH, affecting ~1.5-6.5% of the population in the developed world, is by far the most lucrative opportunity for the company. Fueled by the unhealthy lifestyle changes, the NASH prevalence is on the rise, and the disease can lead to liver fibrosis, cirrhosis, liver failure, cancer, and death. With NASH being the leading cause for liver transplants among women and the second-leading cause among men in the U.S., the market size of NASH therapies could reach $20 billion by 2025, according to some estimates.

With PBC, OCA’s current targeted indication, being a rare liver disease, the regulatory approval for OCA in NASH has gained particular importance for the company as its sales growth slows ahead before the drug’s orphan drug exclusivity for PBC expires in the U.S. in 2023. However, the REGENERATE trial has completed the enrollment for the clinical outcomes cohort and is currently on track to evaluate clinical outcomes for verification of clinical benefits. The plans for a Type A meeting with the FDA are likely in early Q4 2020 (fourth quarter of 2020). As FDA approvals for resubmissions following a CRL typically takes 12-14 months, the NISS evaluation – likely to conclude before May next year – should bring more clarity to OCA’s regulatory path for NASH application in liver fibrosis.

Accounting for ~99.0% of the top line, product sales have historically dominated Intercept’s revenue generation. And the rest from licensing took a hit when the agreement with Sumitomo Dainippon ended in October 2019, depriving the company of licensing revenue this year even as the new patient starts slowed amid pandemic fears. Therefore, from Q4 2019, the overall revenue growth has slowed on a TTM (trailing twelve-month) basis to reach ~29.5% YoY (year over year) in Q2 2020, primarily driven by declining product sales growth.

Source: The Author; Data from Company Financials and Earnings Release for Q2 2020 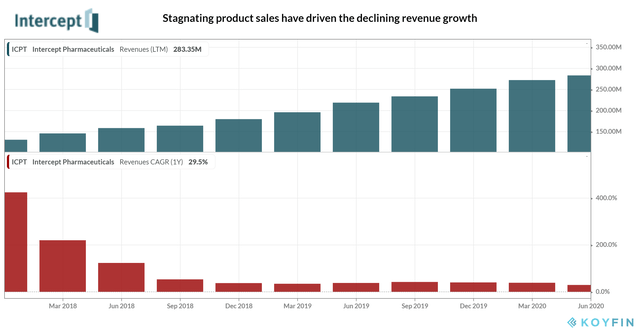 The company has set the full-year Ocaliva sales guidance at ~$300-320 million. On a half-yearly basis, the midpoint of the guidance reflects a slowdown from ~27.3% YoY growth in H1 2020 to ~21.4% YoY growth for 2H 2020. On a TTM basis, it is a deceleration from ~29.7% YoY growth as of Q2 2020 to ~23.0% YoY for the full year. The stagnation mirrors the continuing impact of the pandemic on treatment compliance and new patient starts as the rising unemployment hurts the payer mix. However, with the OCA launch for NASH pushed back, the company has refocused its efforts on its core operations targeting PBC. As the drug battles safety concerns even after a boxed warning and dosing table enforced by the FDA in 2018, the reputational impact could harm the growth even further. Assuming no licensing revenue, my most optimistic assumptions project ~27.0-29.5% YoY growth for Intercept for this year, forecasting ~$320-326.3 million of revenue.

The impact of disruption to OCA’s market launch for NASH has reverberated across the operating line of expenses forcing the company to tighten its belts. With the prelaunch investments pushed back and having eliminated the contract sales force, the company has lowered the previously-issued non-GAAP operating expenses guidance by ~$100 million to ~$460-500 million. The estimate reflects a decline of ~3.9% for this year compared to ~21.6% YoY growth in 2019. The recent decision to shed 25% of the workforce indicates that pressure on cash flow generation persists. Even though the job cuts will be complete this year, the severance-related charges will not cause an adjustment to the guidance, the company discloses. 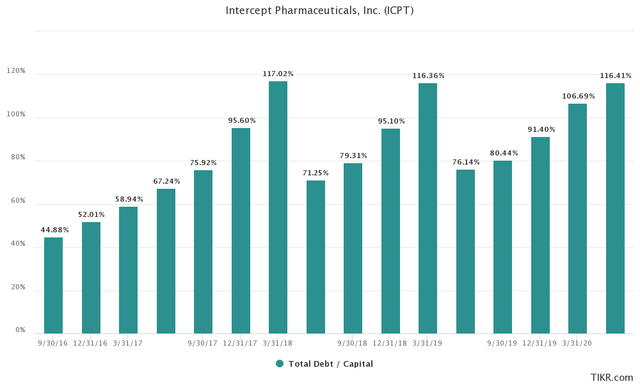 Despite the frugality in spending, cash burn could rise as late-stage clinical trials continue and Phase IV confirmatory trial for OCA for PBC resumes after a COVID-19-related pause in March. Yet, the cash and equivalents stand ~18.1% lower from 2019 year-end. With total debt to capital ratio at ~116.4% as of Q2 2020, the company has shored up liquidity last August with the issuance of ~1.3 million shares causing a dilution of ~3.9%. However, the OCA sales growth for PBC is stagnating even as the FDA approval for OCA in NASH, which is crucial for the next phase of growth, hangs in the balance. Therefore, as indicated by the company’s decision to double the authorized shares of common stock from 45 million to 90 million last May, more share issuances, and therefore, a further equity dilution cannot be ruled out. 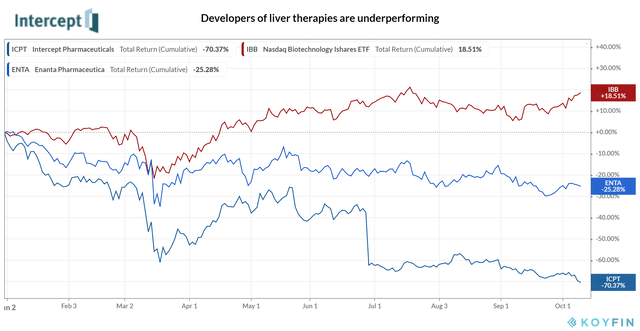 Thin Margin of Safety is Unable to Offset Uncertainty

With shares down ~70.4% in the year so far compared to ~18.3% gain in the NASDAQ Biotechnology Index, Intercept should appear as a bargain for acquirers as suggested by rumors of an activist-led push for a sale. But, given the heavy debt load, dismal growth prospects due to a risky and narrow pipeline, Intercept in the present form can’t be their safest bet. However, with the drug being the only experimental therapy to generate positive interim data in a Phase III trial for NASH, the company’s dominance in the field of experimental NASH therapeutics remains unchallenged. Yet, the path for OCA’s regulatory approval to treat liver fibrosis in NASH needs more clarity. Given the complex pathophysiology of the disease, the clinical endpoints sought by the FDA are challenging, and the invasive diagnostic techniques needed for NASH will slow trial enrollment, creating even more barriers for new entrants. 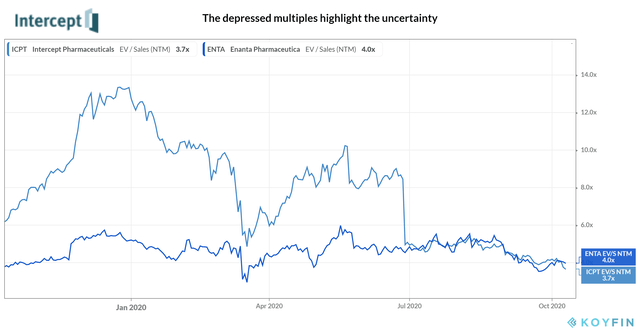 Not only Intercept, but other developers of NASH therapeutics trading at depressed multiples also highlight the risky nature of their path for regulatory approval. Enanta Pharmaceuticals, Inc. (NASDAQ:ENTA) is advancing two FXR (farnesoid X receptor) agonists similar to OCA. EDP-305, currently undergoing a Phase IIa trial, has yielded promising data while a Phase I trial is in progress for EDP-297. Despite the recent catalysts, Enanta has declined more than a quarter in value this year, while its NTM (next twelve-month) price-to-sales multiple hovers around ~4.0x, not far from ~3.7x of Intercept. Despite my sanguine revenue projections for Intercept, the stock, with the current price to forward sales ratio of ~3.9x, indicates a premium of only ~5.2-7.3%, hardly a compelling margin of safety to offset the uncertainty.

Intercept continues to battle a barrage of negative news, the latest of which relates to safety concerns of OCA, once the leading contender for a first FDA-approved therapy in NASH. Even though the revelation was nothing new, the battered stock dipped even further last week, trading close to its 52-week low. Despite Intercept’s leading position in experimental NASH therapies, the pandemic, unemployment, and reputational damage are slowing the revenue growth. Yet with optimistic revenue forecasts and current forward price/sales multiple, my relative valuation indicates a modest premium hardly adequate for a “Buy” given the uncertainty of PBC’s NASH approval as the debt-heavy firm faces cash flow pressure.

If you enjoyed this article and wish to receive updates on my latest research, click “Follow” next to my name at the top.