A woman who has said she was given hundreds of thousands of euros by a powerful Vatican cardinal to conduct secret intelligence missions for the Holy See in Africa has been arrested by Italy’s financial police.

Cecilia Marogna, 39, was arrested on Tuesday evening in Milan after an international warrant was issued against her by Vatican protectors, according to multiple reports in the Italian press.

The arrest is believed to be the first time the Vatican has ever issued an international arrest warrant through Interpol, and is part of an ongoing criminal investigation into the past financial dealings of officials working inside the Secretariat of State, the Holy See’s central administration office.

Earlier this month Ms Marogna responded to reports that Vatican money had been transferred to a company she controlled in Slovenia by Cardinal Giovanni Angelo Becciu. She told the Italian newspaper Domani that she was employed to establish “a network of high-level diplomatic relations for the Holy See” in Africa.

Details of the payments made to Ms Marogna emerged after Cardinal Becciu, one of the most powerful men in the Vatican who controlled the Secretariat’s finances from 2011 to 2018, was asked to resign by Pope Francis because of allegations against him that the cardinal described as “embezzlement”.

Earlier this year a businessman was charged by the Vatican with various offences including embezzlement in connection with his role in helping a group of Secretariat officials acquire outright a London luxury property development in which Cardinal Becciu had overseen the acquisition of a minority stake in 2014.

Holy See police have conducted several raids on offices and residences inside the Vatican, and several members of staff have been suspended as the investigation continues.

Cardinal Becciu has denied any wrongdoing, has not been charged with any crime by the Vatican and has described allegations that he misused Vatican funds as “surreal”.

He has acknowledged he authorised payments to Ms Marogna but said they were made for official diplomatic work and said he had no knowledge of any misuse of those funds.

Ms Marogna has told the Italian media that she had high-level contacts in Italian intelligence and helped the Vatican make risk assessments in dangerous countries where missionaries were at risk of being kidnapped. 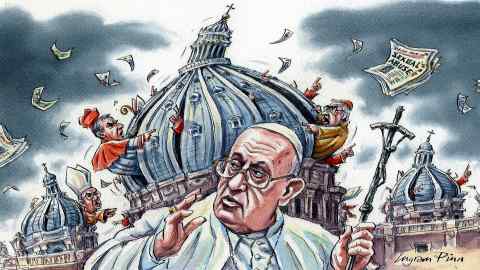 She has acknowledged that large amounts of the payments to her company were spent on luxury items such as handbags from expensive Italian designer brands, but said these purchases were made to facilitate sensitive diplomatic contacts in Africa.

“Perhaps the handbags were for the wife of a Nigerian friend who was able to speak with the president of Burkina Faso,” she told the Italian daily Corriere della Sera earlier this month.

She has said that due to the sensitive nature of her work she was required to make payments in cash, but that she “didn’t steal a euro” of the money given to her by the Vatican.

“If you look at my bank reports you will see that I have given money to companies in Somalia. In some countries you don’t go to pay sources using an ATM,” she said.

Italian courts will now begin a process to decide whether to accept the Holy See prosecutors’ request to extradite Ms Marogna from Italy to the Vatican, which is a sovereign state independent of Italy’s jurisdiction.