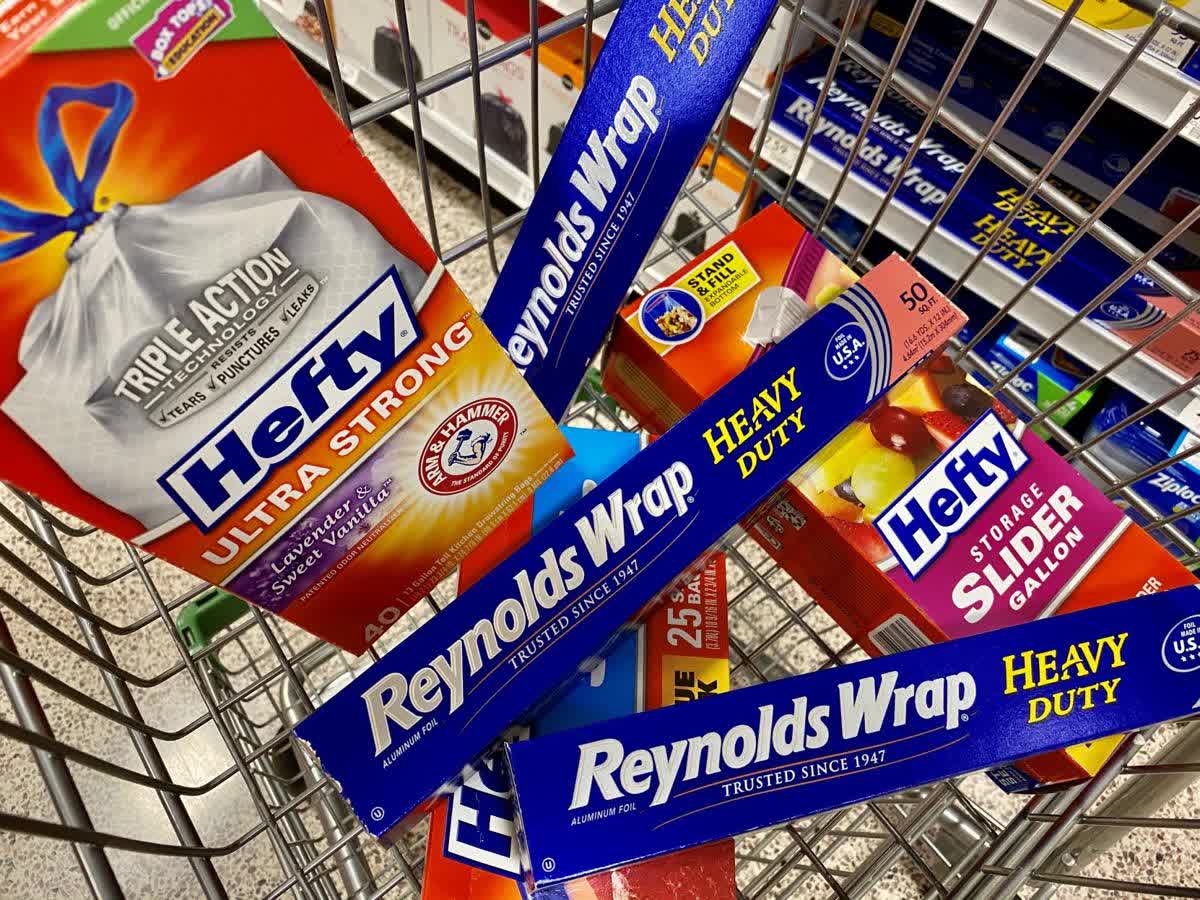 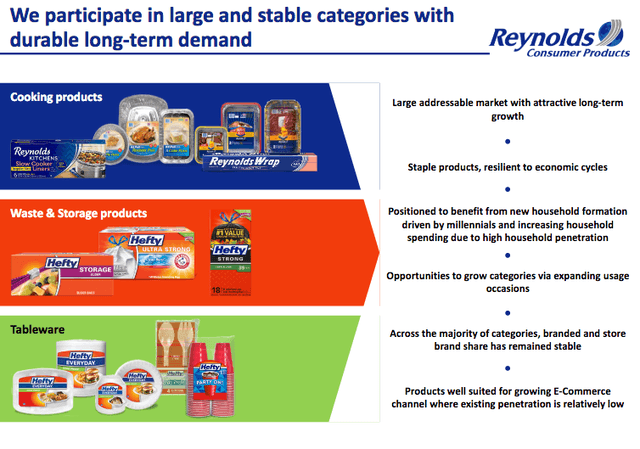 Cooking Products which is compromised of the company’s namesake brand is the largest individual segment. Waste and storage technically are the largest total segment when the Presto brand of products is included. Presto brands is primarily the producer of private label store-branded goods. For grocery stores and the like that need their own brand on plastic wrap, freezer bags, or other offered items. Presto had a 57% share of the U.S. store brand food storage bag category according to the S-1 filing. The smallest division is the Hefty tableware segment which happened to be the only segment to experience a decrease in the latest quarter.

Below we can see a breakdown of each operating segment. 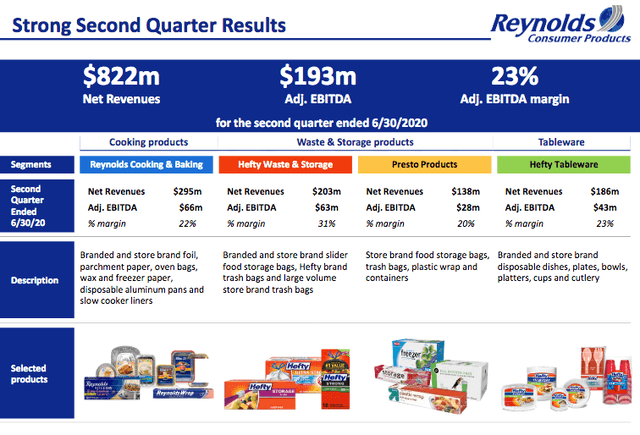 Hefty waste bags actually have the #1 market share position in outdoor garbage bags. The upside potential is in indoor garbage bags which competitor Clorox (NYSE:CLX) made “Glad” brands holds a leading position in. The potential for the company to grab market share in the indoor category is enticing especially when one considers the margin is greatest in this category.

Of particular interest is the company has a large exposure to Walmart (WMT) as its largest single customer. Walmart represented about 27% of the company’s sales and Sam’s Club which is owned by Walmart represented another 12%. This gives Wal-Mart some bargaining power which may increase risk when it comes to raising pricing or offering products to competitors at the same price level.

Looking at how the company most recently performed, we see it beat on the bottom line by missed revenue estimated slightly.

The company notably experienced strong demand for more at home related products such as garbage bags and foil wrap, but, it also saw a decline in tableware items as gatherings both indoor and out were limited with the pandemic. The company also maintains the number one market position in party cups so it’s understandable how this would have an outsize effect on the entity.

Taking a look at the balance sheet, we can see the following. 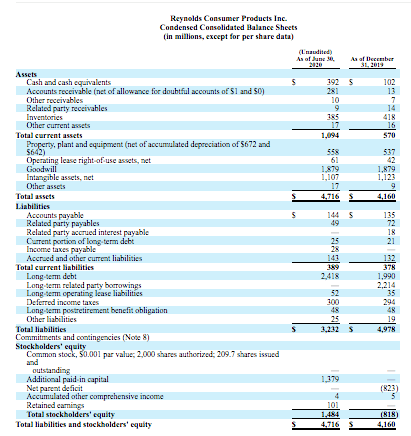 The company has about $392 million in cash on hand and close to $2.42 billion in long-term debt. This normally would be a high debt load given the market capitalization of the company and the earnings, however, the company produces strong cash flow and its debt is primarily tied to a revolving facility of $2.475 billion which it will continue to pay down. The positive note on this is that the reduced interest expense on the debt facility will provide additional income for the company and investors in the future. Given the debt load, I would expect any acquisition in the short term should the company make one to be rather small or financed by further share offerings.

The company expects to produce the following for the full year. 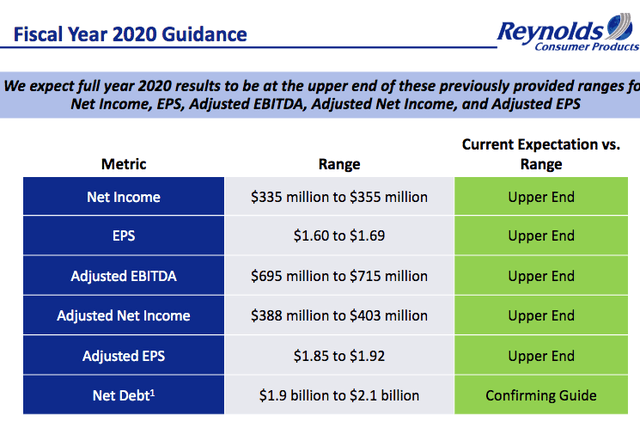 The debt is expected to be reduced thanks in part to the strong earnings and cash flow.

The company trades at 17x this year’s earnings at the midpoint of its guidance which I find to be quite attractive given the valuation of some competitors.

While the yield is not listed above for Reynolds, it is currently 2.76%. The company initiated the dividend at 50% of net income. Presuming the company is shareholder-friendly and wants to continue this policy of a payout ratio near 50%, the dividend should grow in the years going forward. While the company is new, the dividend streak of its competitors does not necessarily mean it should trade at 3-8x less on a forward P/E multiple. Should the company even trade in line with the closest peer Kimberly-Clark (KMB), the share price would increase by over 30%.

I believe as the company continues to prove itself it should see the valuation gap close. 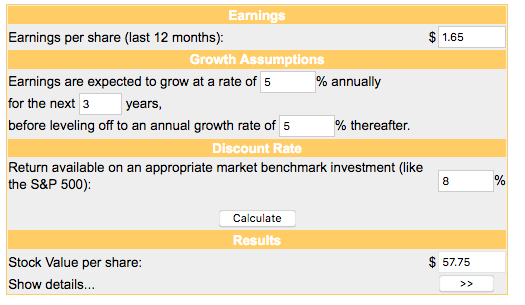 If we look at the discounted cash flow valuation with $1.65 in expected earnings this year, growing 5% a year, the fair value is $57.75. This valuation would presumably move higher should the adjusted earnings be accounted for which are much higher and are currently just being reduced due to the expense of the IPO.

I believe that Reynolds Consumer Products company will continue to grow in the coming years. It operates from a position of strength with market-leading positions in all of its categories. While the growth may not come in at a blistering pace, management has many levers it can pull. The company should see reduced debt, increasing margins, and new products or acquisitions lead the way in its new life as a standalone company. The success of the company will continue to be important as well as shareholder returns as it stands to be one of the largest holdings for its largest shareholder.

The brand names it owns and the quality they stand for are rather difficult to replicate and new competition can be seen as limited. Additionally, the company operates in a relatively recession-resistant industry as garbage bags and foil wrap are generally not economically sensitive. I will continue to hold my shares and let the story of a new standalone company prove itself. I am also happy to own shares in what I see as a discount to its closest peers.

Disclosure: I am/we are long REYN. I wrote this article myself, and it expresses my own opinions. I am not receiving compensation for it (other than from Seeking Alpha). I have no business relationship with any company whose stock is mentioned in this article.