Sri Lanka Telecom (SLT) recently signed a partnership with Land Maark Engineering, one of the leading condominium developers in the country. Accordingly, SLT will provide telecommunication infrastructure and services to the Land Maark Towers situated in Colombo 6, Dehiwala and Mount Lavinia.

SLT will be instrumental in facilitating the infrastructure and all its telecommunication services to Land Maark Towers and the occupants of the buildings. This will also include enabling in-building solutions through its mobile telecommunication arm, Mobitel.

Land Maark condominium are built on the principle of sustainability allowing plenty of daylight and natural ventilation to conserve energy. Built on a legacy of trust and integrity, Land Maark condominiums are known for using superior technology and building material, with a trusted name in the island.

No luxury apartment is completed without a state-of-the-art ICT infrastructure in place, which is where SLT steps in; to power the residents with telecommunications services, ultra-fast broadband connectivity provided through fibre technology as well as the next revolution in entertainment television, PEO TV. SLT will provide the backbone necessary for a Smart Building that will transform ordinary lives of residents into truly digital lifestyles in the near future.

“As an industry that has been contributing largely to

According to report published by Grand View Research, The global artificial intelligence in telecommunication market size was valued at USD 679.0 million in 2019 and is expected to grow at a compound annual growth rate (CAGR) of 38.4% from 2020 to 2027.

The global artificial intelligence in telecommunication market size is expected to reach USD 9.3 billion by 2027, according to a new report by Grand View Research, Inc. The market is anticipated to register a CAGR of 38.4% from 2020 to 2027.

Communication Service Providers (CSPs) need to bring the intelligence in their system optimization, planning, and operations to address the increasing complexities in communication networks caused due to the deployment of new technology paradigms, such as Network Function Virtualization (NFV) and Software-Defined Wide-Area Networking (SD-WAN). Therefore, the telecommunications industry is exploring and introducing AI to improve network efficiency and customer experience.

The telecommunication industry has leveraged technologies, such as cloud computing, big data analytics, and deep learning, to fulfill consumer demands of multimedia services and network security. Also, the intellectualization of communication networks has become possible with the invention of technologies of service-aware network systems and deep packet inspection. Researchers in the industry are tapping into artificial intelligence-based techniques to optimize network architecture & management, and to enable more autonomous operations. 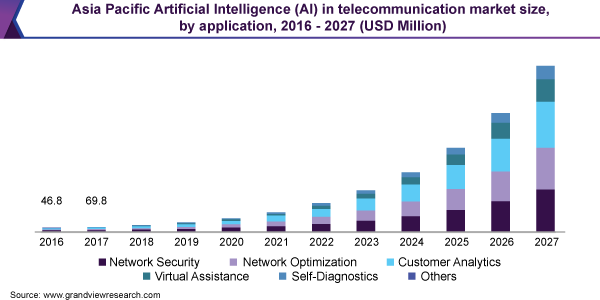 Furthermore, the next-generation wireless networks are anticipated to evolve into more complex system architectures due to the diversified service requirements and heterogeneity in devices, system architectures, and applications. Artificial intelligence has renewed interest in the telecom industry due to the rising complexity of network technology. Potential AI-based use-cases in communication networks include network operation monitoring & management, fraud mitigation, predictive maintenance, cybersecurity, and virtual assistants

The MarketWatch News Department was not involved in the creation of this content.

Get a Free Sample Report @ https://www.wiseguyreports.com/sample-request/5854025-global-ai-in-telecommunication-market-report-2020

For more information or any query mail at [email protected]

Major Key Players Included in This Report are:-

This Report covers the manufacturers’ data, including: shipment, price, revenue, gross profit, interview record, business distribution etc., these data help the consumer know about the competitors better. This report also covers all the regions and countries of the world, which shows a regional development status, including market

The MarketWatch News Department was not involved in the creation of this content.

Sep 28, 2020 (The Expresswire) —
This report aims to estimate the Global “B2B Telecommunication Market” for 2020 and to project the expected demand of the same by 2026. This market research study provides a detailed qualitative and quantitative analysis of the Global B2B Telecommunication Market Size. It provides a comprehensive review of major drivers and restraints of the market.

Get a Sample copy of the report – https://www.absolutereports.com/enquiry/request-sample/15362126

B2B Telecommunication Market report Provide Operational and planned Infrastructure, trade analysis and competition across multiple countries for each segment across the value chain is analysed. Our proprietary databases use cultured B2B Telecommunication market forecast modelling method to provide comprehensive and reliable analysis for your decision-making needs.

The report focuses on the top players in terms of profiles, product analysis, sales, price, revenue, and gross margin.

Major players covered in this report:

On the basis of types, B2B Telecommunication Market is primarily split into:

On the basis of applications B2B Telecommunication market is primarily split

KUCHING: Sarawak expects to complete building 300 telecommunication towers by next year to improve mobile and Internet connectivity in rural areas.

“The remaining 116 are expected to be completed by the third quarter of 2021, ” he said when opening the International Digital Economy Conference Sarawak (IDECS) 2020 at Borneo Convention Centre Kuching here.

The telecommunication tower initiative is part of efforts to provide digital infrastructure and economy under the state’s digital economy strategy.

Abang Johari said the rollout of another 300 towers in phase two of the initiative was still in the planning stages.

He said the 600 towers in total would complement the Federal Government’s National Digital Infrastructure Plan (Jendela) initiatives, which include 636 new towers in Sarawak.

“This strategic partnership will realise the state’s vision of achieving 99.9% broadband coverage throughout Sarawak, ” he said.

For instance, he said, the state government had allocated RM3mil to upgrade Internet connectivity in nine national parks, with the first at Semenggoh orang utan rehabilitation centre already completed.

“To accelerate Internet connectivity to underserved rural communities, the state government has established free WiFi connectivity for a number of villages and longhouses.

“Through this initiative, each village will share a bandwidth of 30Mbps.

“To date, 20 villages and longhouses have been digitally connected to access the Internet, government services and Sarawak Pay (e-wallet facility), ” said Abang Johari.

“I believe that installing VSAT stations