Stocks may be breaking out and on their way back to their all-time highs ahead of the US election. Emotions are running high that a blue wave will take shape during the election, resulting in the Democrats taking the house, the Senate, and the presidency. This would likely result in a huge stimulus bill to take place. It’s one reason why stocks are rising sharply and will likely continue to rise until the night of the election. It could result in the S&P 500 even reaching a new all-time high before that date.

Added to that, we are beginning to see an increase in options activity that suggests the call buying is increasing and that more participants are returning to the market. In fact, there were two rather large bets placed, by what looks to be a large institution, for both Microsoft (MSFT) and Apple (AAPL), suggesting higher prices may be on the way.

The move higher in the marketplace is being derived from the idea that there will be a large stimulus package, and in some cases, some analysts have estimated by as much as $7 trillion. Should the Senate turn Democratic and Joe Biden win the presidency, a large stimulus bill could be created and help produce plenty of money to help restore the economy from the coronavirus pandemic.

However, there are obvious risks to that thesis because some polls are under sampling the Republican population, which would mean there’s a chance a blue wave doesn’t occur. In fact, one recent poll done by Economist/YouGov shows that Biden was leading by about 9 percentage points. But when digging into the data, it showed that Republicans were badly undersampled, representing just 27% of participants, vs. 38% for the Democrats and 35% independents, suggesting that Biden’s lead may lead not be as big as it looks.

Should there not be a blue wave that takes place, it could cause a problem after the election. But that doesn’t mean that stocks can’t continue to rise until that time.

Options on The Rise

We’ve also seen the number of daily calls being traded regularly rising, slowly approaching the levels last seen in August. More signs that bullishness is returning to the marketplace. For example, there were two tremendous bets placed on Apple and Microsoft. On Oct. 9, the open interest for the January 15, $140 calls. The data shows that the calls were bought for about $3.25 per contract. It equates to almost a $20 million bet that Apple’s stock will rise over the course of the next three months. 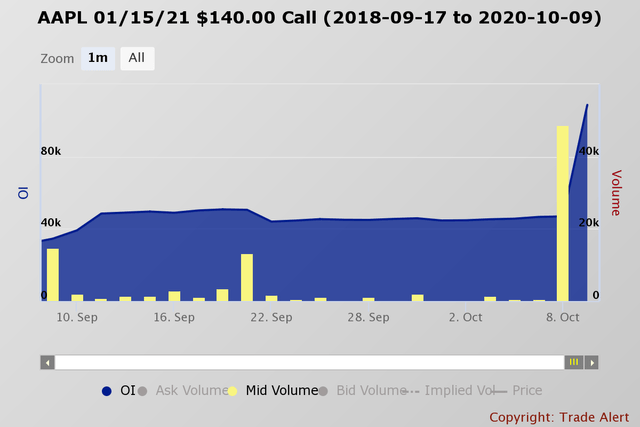 Meanwhile, Microsoft also saw a huge bullish bet for the January 15, $240 calls. These calls were bought for about $6 per contract equate to nearly a $10 million bet that Microsoft stock will rise over the course of the next few months. 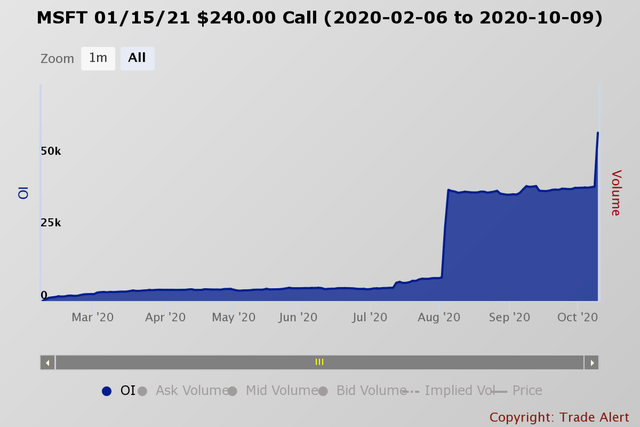 The stocks do not need to achieve those strike prices for the buyer of the calls to benefit. A run-up into the election of a sizable amount could result in these two stocks moving higher from their current levels. Both stocks are market leaders that it would be hard for. Either the Nasdaq or the S&P 500 to advance without them.

Technically, the market is trying to break out, rising above a key level of resistance at 3,425. Now it appears at the next level of resistance is being breached as well at 3,470. Should the index rise above 3,470, then it’s likely for the index return to around 3,590, which was its previous all-time high back on Sept. 2.

The dollar also is pricing in a potential blue wave sweep falling in recent days. We have also seen the 10-year move higher to around 80 basis points from 60 basis points over the course of the last couple of days. Again, these would indicate people perhaps getting nervous of a larger debt being piled up and bigger deficits being run here in the US should there be a blue wave sweep take place. 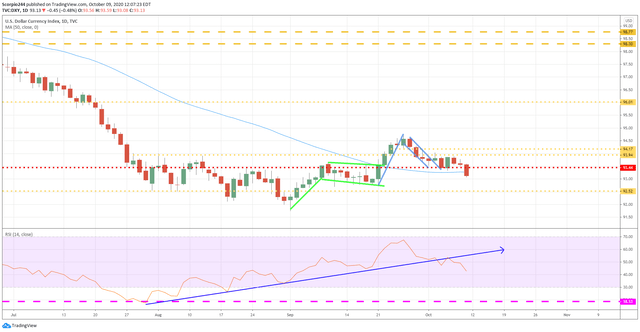 Again, as previously noted, the odds of a blue wave might be more difficult than what some people are betting on. But for right now, that seems to be the bet the market, at least until election night.

Love this article? Then hit the follow button at the top of the story!

Let The Market Be Your Guide

Finding the next big move in the market is never easy, so let us help you determine what that move will be. Every day, Reading The Market uses changes in fundamentals, technicals, and options markets to determine the next significant move in stocks, sectors, and indexes.

To Find Out More Visit Our Home Page

Additional disclosure: Mott Capital Management, LLC is a registered investment adviser. Information presented is for educational purposes only and does not intend to make an offer or solicitation for the sale or purchase of any specific securities, investments, or investment strategies. Investments involve risk and, unless otherwise stated, are not guaranteed. Be sure to first consult with a qualified financial adviser and/or tax professional before implementing any strategy discussed herein. Upon request, the advisor will provide a list of all recommendations made during the past twelve months. Past performance is not indicative of future results.