UMB Financial, along with its sibling bank, Commerce Bancshares (OTC:CBSH), both have a storied century-long history of being run by the Kemper family. With that being said, I have a lot of faith in Mariner Kemper, the current CEO, and his ability to lead the franchise. He has led the bank for more than 15 years and helped grow assets from $8.2 billion to where they are today.

Today, my bullish stance is predicated on a couple of factors. I think the valuation is too low for such a well-run franchise; however, valuation alone does not invoke a great investment thesis. In order for shares to re-accelerate higher, I think there needs to be a definitive line of sight into the net interest margin (NIM) no longer compressing. This alone should help shares work higher in the shorter term. If credit continues to remains stronger than average over the next couple quarters, I think the shares will experience very healthy outperforming trend. In short, the positive NIM outlook should cause a near-term pop in the shares, while solid credit should provide the positive catalyst for long-term outperformance.

In the second quarter the net interest income came in at $178.2 million, which was actually up a little more than $4 million from first quarter levels. While the NIM did compress in the quarter, overall loan growth (greatly supported by PPP loans) helped drive higher average earning assets to support a higher linked quarter result.

In the quarter overall, loans were up $1.5 billion. If one were to back out PPP loans, it was pretty much flat from the first quarter’s ending levels. However, management indicated that while overall core growth was flat, the negative effect of line draw paydowns was equally offset by new loan production.

The second-quarter NIM also contracted quite a bit, to the tune of 18 basis point relative to first-quarter levels. The mechanics behind the NIM were a little more revealing: average earning assets were down a sizable 57 basis points, only to be partially offset by a 58-basis point drop in liability funding. While this might not make mathematical sense, since they just about even out, it’s important to note that the earning asset mix shift caused overall yields to be lower, and the funding base had too much liquidity on the balance sheet. When adding all four of these factors together, it makes sense that the NIM would have compressed. 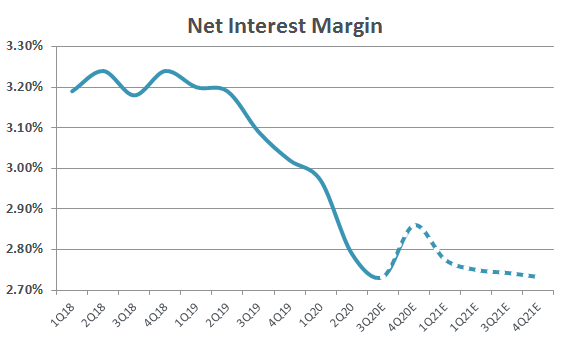 With so many moving parts, each individual quarter is hard to model. Also keeping in mind that PPP loans are likely to be forgiven in the fourth quarter of 2020, the NIM is next to impossible to nail down exactly. This inability to see the next six months is part of the reason why I think shares are undervalued.

From a trend perspective, I think the third quarter will show some continued deterioration in the margin. However, once the PPP loans are actually forgiven, they will cause a bit of a pop in NIM. From there, excess liquidity will likely be put to work in higher-yielding assets.

From a catalyst perspective, on the third quarter conference all, I believe management will indicate that the future NIM is either stable or likely to work higher. If something to that extent is telegraphed to the market, I believe shareholders are likely to be rewarded over the near term. While weighing all the moving parts is difficult, once the market has some clarity on what to expect and, most importantly, when, I think shares will go higher.

As one can see from the chart below, net charge-offs (NCOs) were not really a factor during the last recession. More recently, when looking at 2019, the slight increase was related to a $48 million factoring loan that was associated with fraudulent documentation.

In my mind, I believe the recent NCOs has been a limiting factor for the shares. I think investors would value the company slighly higher if there wasn’t a sizable NCO in recent memory. However, since there was a sizable NCO recently, UMBF will likely need to string together a couple of good credit quarters in the face of a recession in order to gain back its lost ground in terms of being a “credit-first” type of bank. 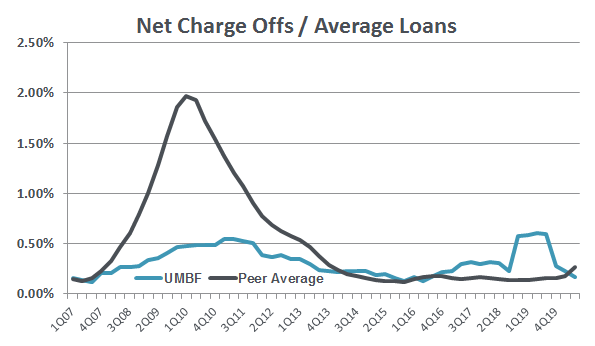 In the second quarter, the loan loss provision was $21.5 million. This marked a very sizable decrease, of more than $66 million, from the first-quarter provisioning expense. According to management, the 1H20 reserve building was mainly driven by the adoption of CECL. Also, NCOs were pretty minimal at $5.5 million, or just 0.15% of loans. This marked a slightly improvement from the first quarter, which had $7.7 million, or 0.23%. 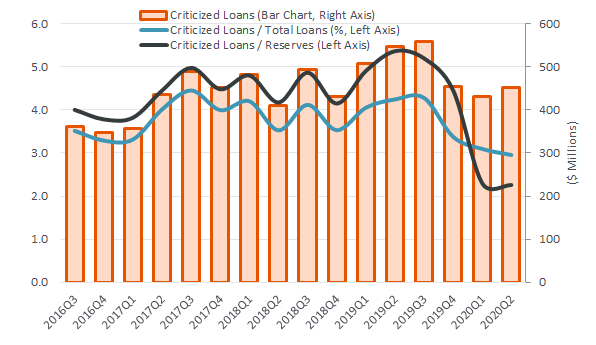 When looking at the chart above, one can see that the overall net dollar amount of criticized loans has actually gone down in this recession. While that in and of itself is a solid directional move, the black line (criticized loans / reserves) moving drastically lower towards 2.0x (on the left hand y-axis) is much more important, to my mind.

Those that follow me through my other articles would know that roughly 2.0x criticized loans / reserves is the area in which I feel most banks should be given the tough economic environment. After reviewing a bank’s portfolio composition, that 2.0x could drift a little higher or lower depending on the risk.

When reviewing UMBF’s profile and history of limited NCOs, I believe the current reverse level makes sense, but would not be surprised if management erred on the side of caution and continued to increase over the next few quarters.

Recall, my main thesis is two parts. First, I think the NIM will show some stability on the third-quarter conference call, which will be enough positive news to cause shareholders to revalue the stock higher. Even if the NIM falls during the third quarter, if there is a line of sight to a higher NIM in the near future, then shares would likely turn positive. Second, credit needs to continue to be solid in order for shares to continue to grind higher over the next 12 months.

When looking at UMBF’s credit profile and past decade of history, I feel pretty comfortable with the current reserve level. While there could be some mild improvement, I took a little bit of conservatism in my modeling. While my model does have roughly $30-35 million per quarter of provisioning expense until the end of next year (which I would guess is on the high end), I did want to point out that even in that scenario, next year’s earnings show growth and the dividend is very safe.