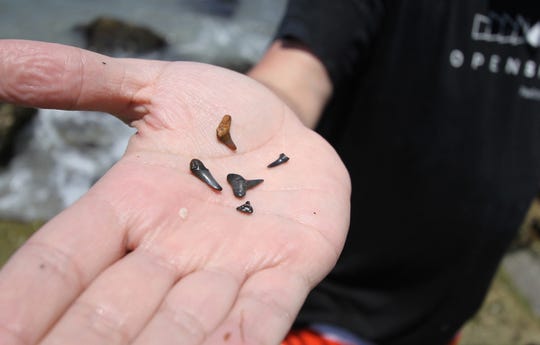 Steven Fabijanski shows off a few sharks’ teeth he found in July 2014, at Caspersen Beach. Visitors from all parts of the state and country come to Caspersen Beach to sift through shells and sand to take home sharks teeth and fossils. (Photo: MATT HOUSTON / HERALD-TRIBUNE)

VENICE – When Visit Sarasota County wants to differentiate south Sarasota County beaches from the rest of the state, they quickly point to the Venice area and the pastime of searching sand near the surf for fossilized shark teeth.

“It’s very important,” Visit Sarasota Vice President Erin Duggan said. Many beach communities have fine restaurants, she said, but, “talking about the shark’s tooth draw and Venice being the shark’s tooth capital of the world, it’s always given us something to differentiate us from other beach locations.” 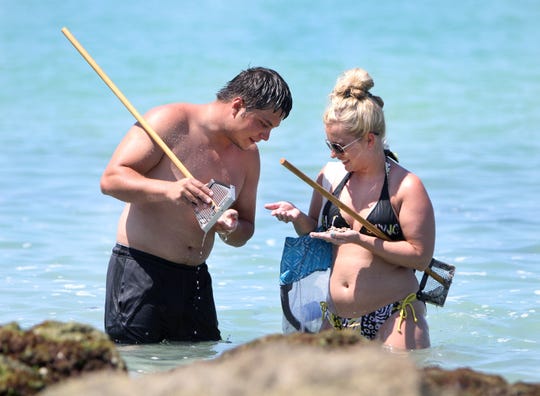 Justin and Heather Johnson, who vacationed at Venice and Caspersen Beach from Texas in July, 2014, look for sharks teeth. Visitors from all parts of the state and country come to Caspersen Beach to sift through shells and sand to take home sharks teeth and fossils. (Photo: MATT HOUSTON / HERALD-TRIBUNE)

On its web site, Visit Sarasota County points to the beaches from Casey Key south to Manasota Key as wonderful places to search for shark’s teeth, but south Brohard Beach and Caspersen Beach stand out for the sheer quantity of teeth – though shark tooth and fossil aficionados are quick to point out that prized large fossilized megalodon teeth are most frequently found by divers offshore.

“I personally have met plenty of people on the beach and you can tell when you see somebody on the beach looking for shark’s teeth,” Venice MainStreet CEO Kara Morgan said. “They come to Venice specifically for that, it certainty plays into the town’s identity and is something of importance in terms of our character and charm and our culture, so to speak.”

Teeth from Lemon and Bull sharks are what people scouring the shoreline most frequently find. 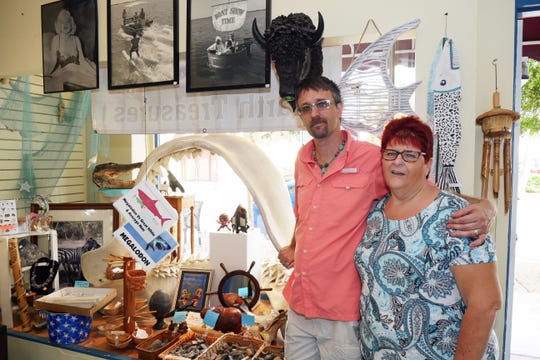 Don and Draeanne Rivette, owners of Earth Treasures on Miami Avenue, pose in front of their display window, which includes a model of the jaws from a 42-foot-long Megalodon shark. Earth Treasures is one of two shops on the island of Venice that offer beachcombers expertise on the hobby of collecting sharks teeth and fossils. (Photo: EARLE KIMEL / HERALD-TRIBUNE)

Two stores on the island of Venice – Earth Treasures at 207 W. Miami Ave. and Shark Frenzy at 262 S. Tamiami Trail – specialize in fossilized shark teeth and sell a variety of fossils to enthusiasts.

Vacation led to the perfect sifter

Brittanie Hervas and her parents Roy and Linda are exactly the type of people Visit Sarasota likes to see frequent Venice area beaches. 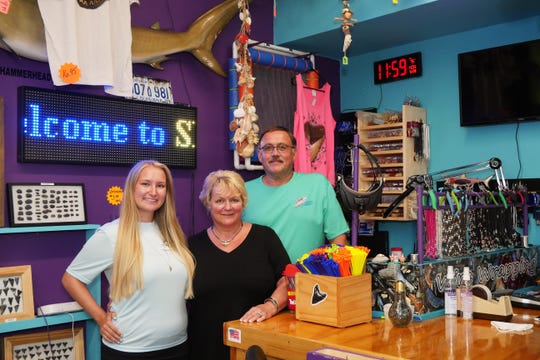 Brittanie Hervas poses with her parents Linda and Roy Hervas behind the counter at Shark Frenzy, the beachcombing store they opened up in December, 2019 on Tamiami Trail. (Photo: EARLE KIMEL / HERALD-TRIBUNE)

For years, they traveled from Schaumberg, Illinois, to the Gulf Coast of Florida for vacation.

They started in Captiva then moved north to Venice, where they became fascinated by shark’s teeth.

“For about 15 years we’ve been coming down to Venice, just vacationing down here,” Roy Hervas said. “When we came down here to look for sharks’ teeth, we felt there’s got to be more than a sand flea rake, and there wasn’t.” 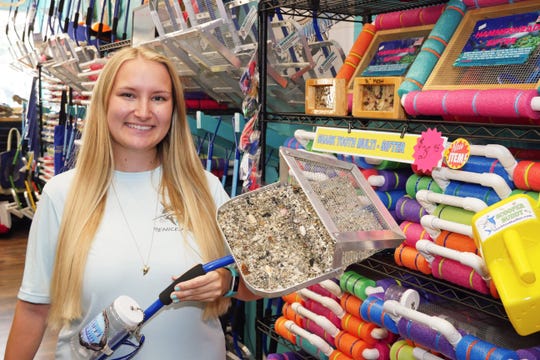 Brittanie Hervas shows off a display model of the Shark Tooth Sifter, a patented tool for scouring the seashore for sharks teeth, shells and fossils that her family designed and sells at Shark Frenzy, a store she opened with her parents Roy and Linda in December, 2019. (Photo: EARLE KIMEL / HERALD-TRIBUNE)

The Hervases used resources at their snow plow shop in Schaumburg to create the Shark Tooth Sifter. Enough people asked about the hybrid shovel/sifter that Hervas decided to ask his brother, an attorney, to help draw up a patent.

After selling the sifter through other shops, they opted to open Shark Frenzy in Dec. 2019.

There are a variety of tools available at Shark Frenzy on Tamiami Trail that can be used to find fossils, shells and shark teeth on area beaches. (Photo: EARLE KIMEL / HERALD-TRIBUNE)

The interior color scheme of their shop is aqua and purple, with a plentiful supply of Shark Tooth Sifters, as well as other similar devices that allow families to sift for shark’s teeth together, along with the requisite tourist trinkets, hats and souvenirs.

“We want people to have the experience that we had when we first found shark’s teeth,” said Brittanie Hervas, who’s the face of the shop on an active social media presence that includes Facebook groups and TikTok.

“I post my finds to let others see what we’re finding at the beaches, and it starts the conversation,” Hervas said.

“We want it to be an amazing, amazing time for them, we certainly fell in love with collecting sharks teeth, we know that’s something that’s amazing to do here in Venice,” she added.

Brittanie Hervas notes that her main demographic is young and female – just as she was a young girl captivated by sharks’ teeth.

From flea markets to Miami Avenue

Don and Draeanne Rivette know all about the joy of collecting sharks teeth and fossils.

“I like the sense of discovery, like customers do,” Don Rivette said. “It’s a very thrilling experience to look down and pick something up and then to realize it’s a part of an animal that has not existed on this earth for millions of years.”

The New England transplants started collecting and selling through flea markets seven years ago in Port Charlotte. They went on to their first shop in Englewood, before settling into their current location on Miami Avenue almost five years ago.

Of course it hasn’t been easy going since the relocation. First it was Hurricane Irma, then red tide, followed by the reconstruction of Tampa, Venice and Miami Avenues by the city of Venice, and this year the COVID-19 pandemic that cut short the season..

“We’ve seen a lot of stores go and by the grace of God, we’re still here,” said Draeanne Rivette, who can craft unique jewelry from the treasured finds customers bring in.

Draeanne Rivette made this pendant from Glyptodont scute, which is available at Earth Treasures. Draeanne and her husband Don Rivette take joy in educating people about the different type of fossils people can find in the areas. (Photo: EARLE KIMEL / HERALD-TRIBUNE)

“Fossils shells, sea glass, she can wire wrap any object,” Don Rivette said. “People have brought in stones that are important to them, that they want to remember a loved one.”

One customer came in five straight days with different finds from a fossil hunt with Don that she wanted turned into jewelry.

With the requisite model of a jaw of a 45-foot-long Megalodon, alligator heads, sculptures, and walls decorated by art available on consignment from a local dealer, Earth Treasures has an old Florida charm that comes with time.

The shop was featured on the PBS Fossil Hunters Mammoth Special from 2018, which is available in its entirety on YouTube.

A customer who later became a friend, made this Earth Treasures mosaic shortly after Don and Draeanne Rivette opened their store. (Photo: EARLE KIMEL / HERALD-TRIBUNE)

To take advantage of the late-September off-season lull, the Rivettes were doing a little shop remodeling, including a rearranging of shelves, with white sea-foam accents being painted on the blue floor.

They’re planning to augment their web presence with a Google 360 tour of the store, so people can get a better sense of what’s inside.

“We’ve tried to diversify to respond to customers’ needs,” Rivette said. “We’re competing with them down the street and we are competing online.”

Over the years, Don Rivette has befriended local archaeologists and can talk for hours on fossils of all sorts. Shark’s teeth, for many enthusiasts, are a gateway fossil.

He proudly points to a necklace Dreanne made from a Glyptodont scute – an armored plate from a long-extinct relative of the armadillo.

“It’s an example of an ice age creature that a lot of people don’t know ever lived here,” he said, then continued to explain how it came up from South America through the isthmus of Panama some 50 centuries ago. “When you start looking for shark teeth, you find other things.” 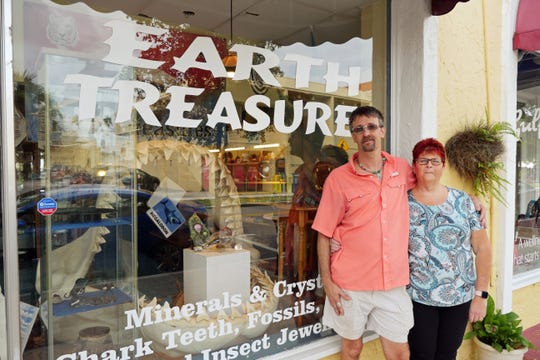 He loves when people bring in items that he can help identify.

“It opens up a whole other universe of exploration for people who love looking for shark teeth,” Rivette said. “I enjoy finding the fossils just as much as the shark teeth.”

For some people, that can lead to snorkeling or diving for larger pieces, or just walking the beach eyeing the sand for a prize.

“You can use your hands and eyes or get all kinds of fancy equipment,” Rivette said. 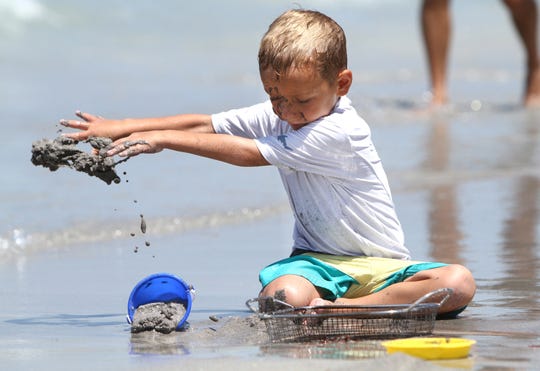 Bradley Cerer looks for sharks’ teeth in July, 2014, at Caspersen Beach. Visitors from all parts of the state and country come to Caspersen Beach to sift through shells and sand to take home sharks teeth and fossils. (Photo: MATT HOUSTON / HERALD-TRIBUNE)

For young children, he said, a household colander can work as a great entry into searching for fossils or shark’s teeth.

Fruits of an offshore ancient riverbed

Most of the teeth on Caspersen Beach are from Lemon sharks. One shark, be noted, can make 45,000 teeth. Multiply that by the generations of sharks offshore and the variety of species – though the next most plentiful are bull sharks – and it’s easy to see why the local shores seem to boast an endless population of shark teeth and fossils.

An ancient river channel off the coast is a fertile source of fossils, Rivette said. Divers will search for finds there, while storms loosen material that eventually moves onshore with the wave action.

Most of the teeth, both Don Rivette and Brittanie Hervas note, aren’t perfect, since teeth get damaged when they eat.

Larger megalodon teeth Rivette said, can have blunt tips because the fish had such a powerful bite force to cut through the cartilage and vertebrae of whales. 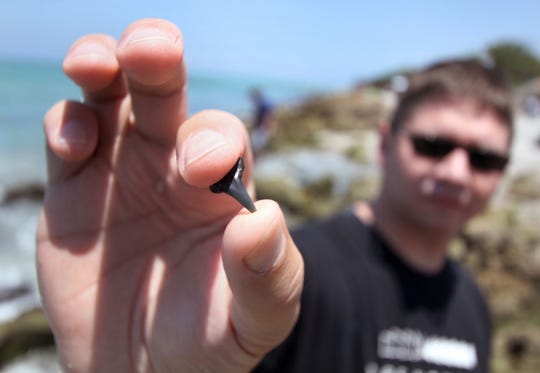 Steven Fabijanski shows off one of many shark teeth he found in July 2014, at Caspersen Beach. Visitors from all parts of the state and country come to Caspersen Beach to sift through shells and sand to take home sharks teeth and fossils. (Photo: MATT HOUSTON / HERALD-TRIBUNE)

Though each shop has different aesthetics and they’re clearly in competition, the proprietors all pride themselves on providing hands-on customer service and understand that they’re offering both novice vacationers and returning hobbyists memories.

“We sell an experience,” Brittanie Hervas said. “They’re going home with bags of teeth and that’s what they came here for.”

Don Rivette said that some of the most memorable gifts they’ve made have been the finds of children who “worked hard to find shark teeth but they wanted to give them to their friend in school or ship them up to grandmom up north.

“It’s wonderful to see how people give shark teeth and love to family members or friends.”

• To read about the Shark Tooth Capital of the World, visit https://bit.ly/2SojvnL